Chakra – An engaging thriller with Vishal in form

After Action, Vishal is back on screen teaming with debutant director MS Anandan for Chakra, a movie set in the world of digital crimes and hacking. With the interesting cast including Shraddha Srinath and Regina Cassandra, the movie promised an exciting thriller, and let’s see what Chakra has in store.

Chakra begins with multiple robberies happening on the same day, and one incident happens at army officer protagonist Chandru (Vishal)’s house as well. As Chandru and Gayathri (Shraddha Srinath) start investigating the case, they find out that Chandru’s father’s Ashoka chakra medal has also been stolen. As the duo further investigate, they find the culprit behind and a cat and mouse chase ensues. Who’s the robber, what’s the motive of the robber and whether Chandru and Gayathri were able to nab the criminal is what Chakra is all about. 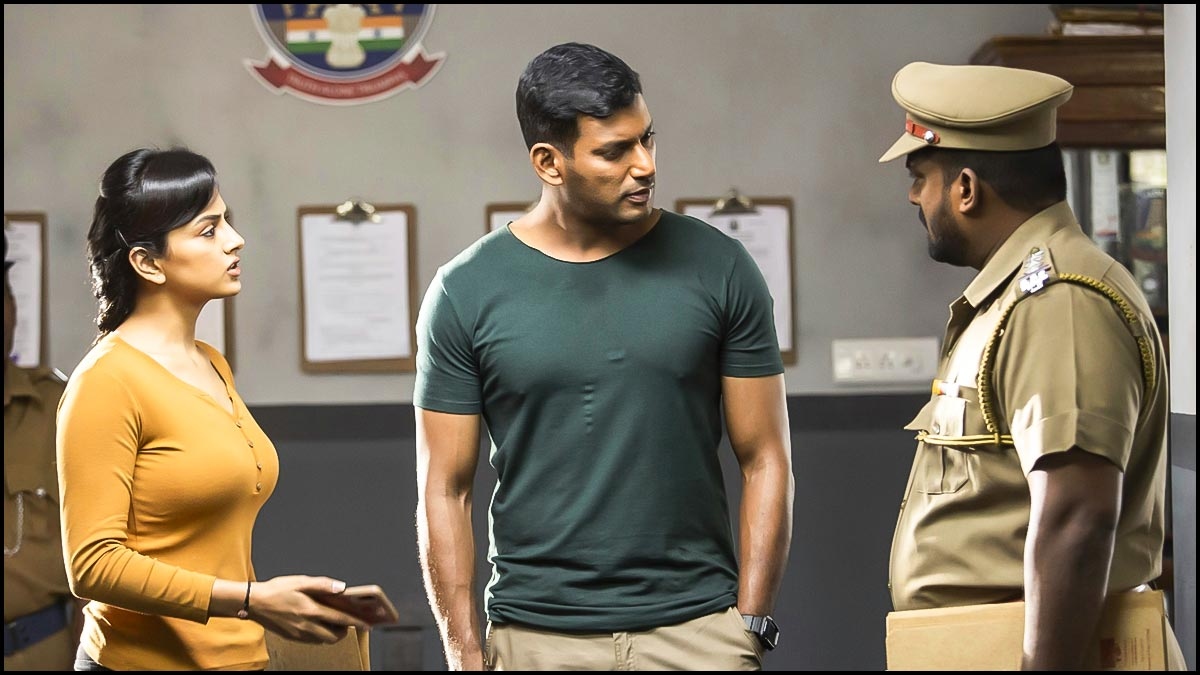 Vishal as the quintessential action hero amazes in stunts, and delivers an engaging performance as the army man in hunt for something important that he loses. Shraddha Srinath as the cop who stands by Vishal’s character is perfect with her body language and gives a convincing act and is good in action episodes as well. Regina Cassandra’s character is a revelation, and the actress excels with her display of menacing villainy. The rest of the cast including Neelima, Srushti Dange, Robo Shankar are adequate.

The first half of the movie proceeds, establishing robberies and the investigation process involving Vishal and Shraddha Srinath, and the linear screenplay doesn’t have much of high moments except for the revelation of the hacker criminal being a woman. 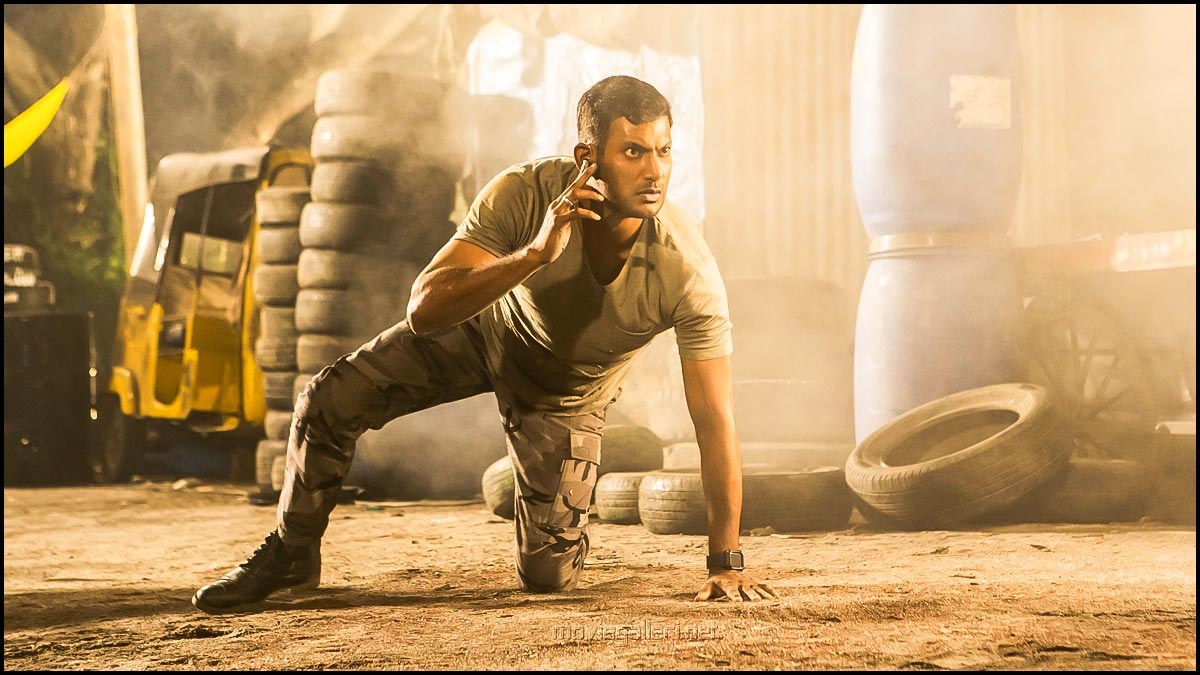 The second half gains momentum and progresses at a good pace, as the game between Vishal and Regina begins, with the latter posing challenges to Vishal, to track her and prove her crimes. With some thrilling, interesting sequences, Chakra ends on a high, and satisfactory note.

Background score by Yuvan Shankar Raja is pulsating and is in sync with the theme of the movie. Cinematography by Balasubramanyam captures the stunning action sequences and chases impressively. 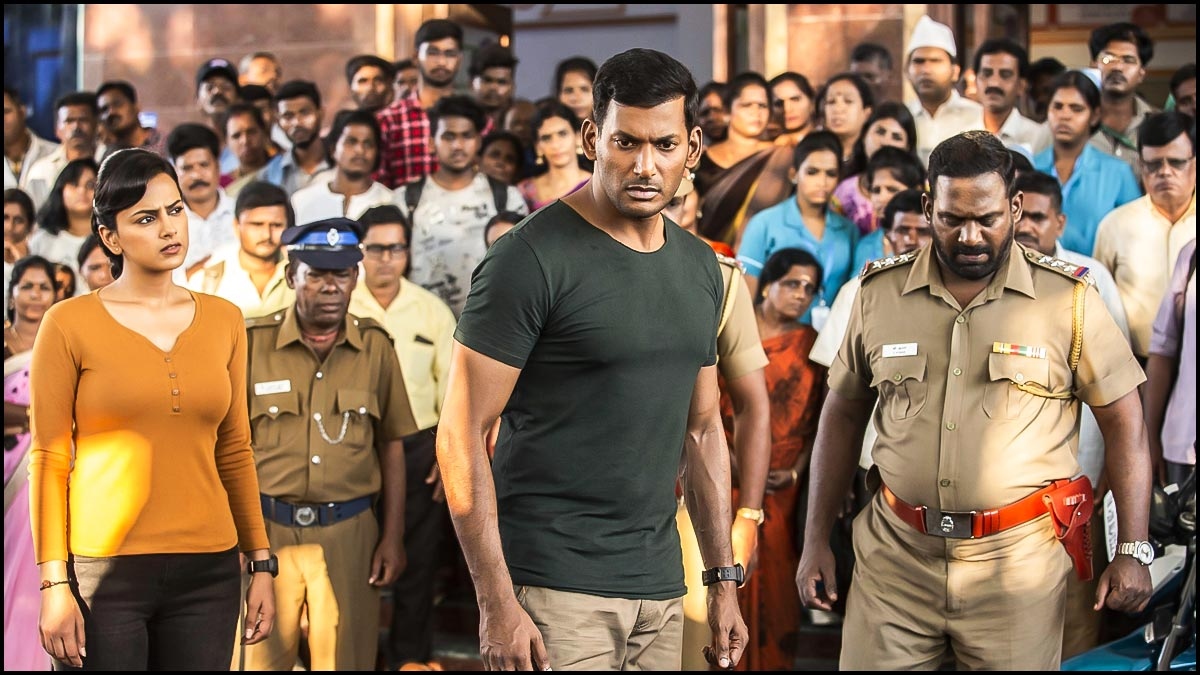 Debutant MS Anandan has set his Chakra in the same universe as that of Vishal’s hit cyber thriller Irumbu thirai, and succeeds in fairly engaging the audience, especially with the racy second half. While the plain narrative in the initial half of the movie sans thrills might hamper the excitement, the next part makes up for it with many interesting sequences, such as the chess episode, and the fights between Regina and Vishal. The screenplay by MS Anandan is well complemented by action choreography and cinematography that makes fight scenes look real. The flashback part explaining the motive behind the culprit’s crimes could have been innovative, as it gives a sense of deja vu. Despite the shortcomings in the initial part of the movie, Chakra turns out to be a thrilling entertainer with gripping sequences. All said, MS Anandan engaging screenplay powered by macho hero Vishal and surprise package Regina Cassandra’s performance makes Chakra a winner.

Verdict: An engaging thriller with Vishal in form.